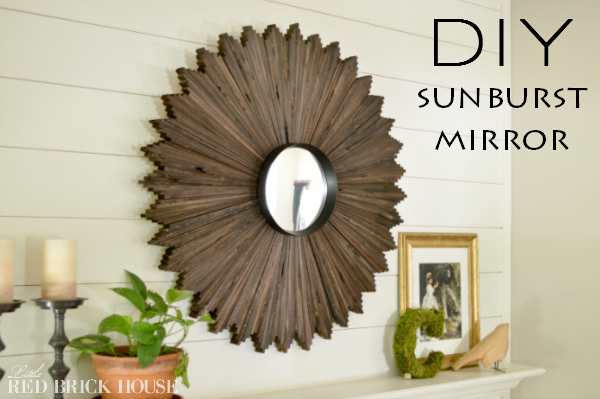 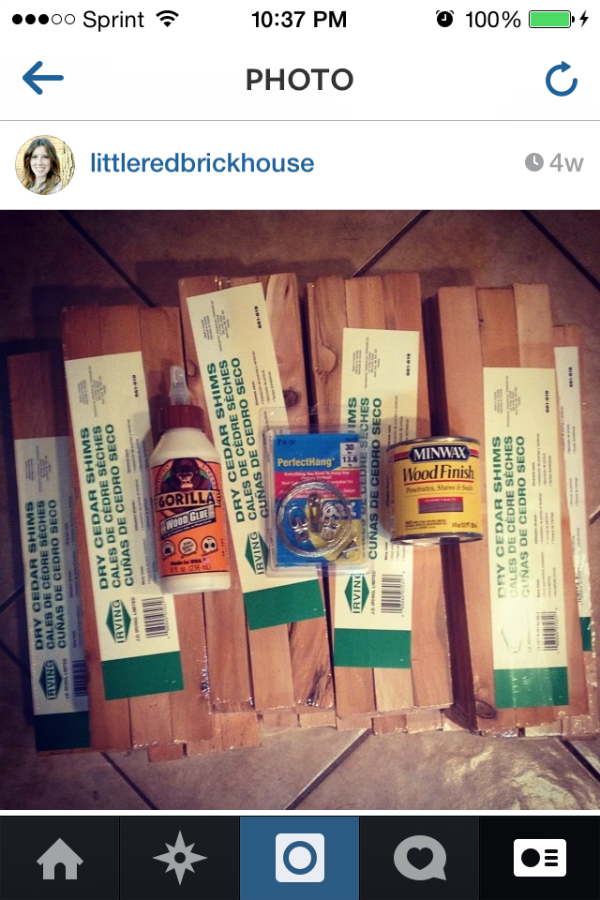 I know that sunburst mirrors are SO three years ago, but I love them and think they are still totally cool. There are many ways you can make a sunburst mirror but I like this spin on the traditional look where the wood shims are turned sideways and staggered at different heights.

I originally had another idea of what I wanted to place above the fireplace mantle but that project ended up being a little too much white on white and I wanted more depth and interest in the space. Let me show you how I made my DIY Sunburst Mirror.

First I made individual sections of shims by staggering and gorilla gluing them together in multiples of seven and nine. I let them sit for twenty-four hours to make sure they set right. 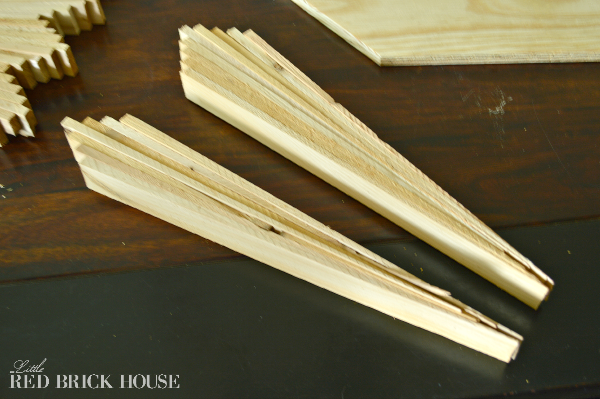 After they were all dried and set, I glued them to a piece of scrap 1/2 inch thick plywood. I alternated the sections by putting a seven count section next to a nine count section and so on. For this part I used Liquid Nails because I wanted to make sure that those shims didn’t end up popping or sliding off the plywood once hung vertically. 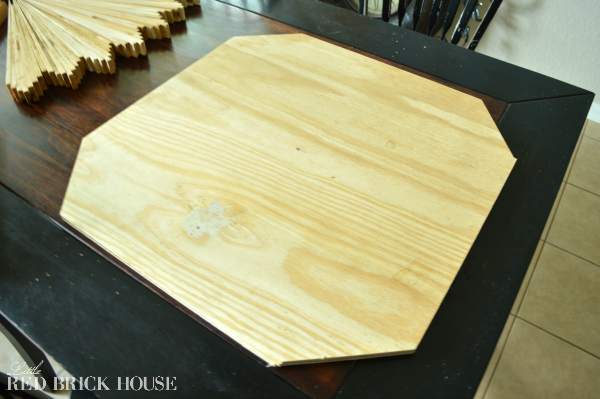 I laid a large flat object (aka an upcoming project) on top to help disperse the weight from the ammo boxes that were used to weigh the mirror down. I needed something heavy and they happened to be the first thing I thought of. Ingenuity at its finest. 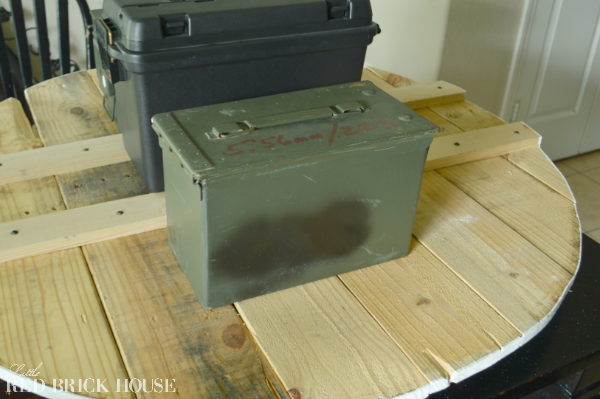 Next I stained the piece with my favorite stain of choice, Dark Walnut by Minwax. I loooooove this color. I didn’t bother to seal the stain with poly or wax because it won’t be getting any wear and tear since it will be hanging on the wall. 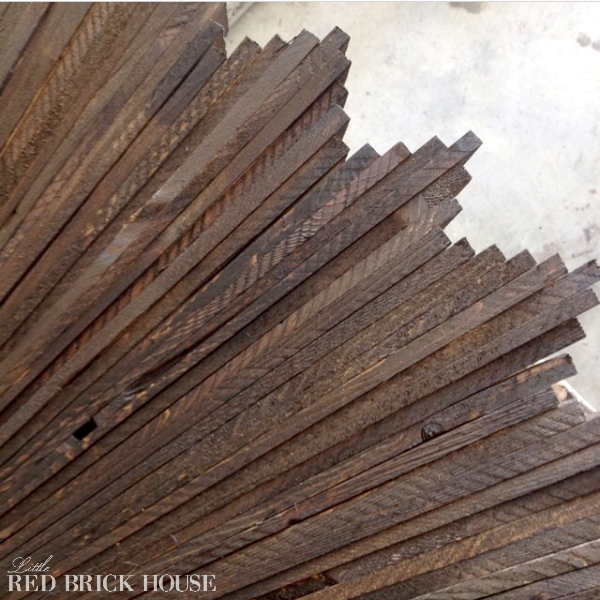 For the mirror I chose to use the largest in this Threshold set of five from Target. I love how the mirrors aren’t just a flat piece of glass but have a nice thick rimmed frame around them. I think it adds some great dimension. I already have some ideas for how to use the others in the set. 😉 I glued that down using the Liquid Nails and ammo box weight method from above.

After that sat for twenty-four hours I was ready to attach my mounting hardware. The hubster picked up this handy picture hanging kit which was super easy to install. You just screw in the D-rings, thread and tie the wire through each ring and then hang! See? Simple.

I was really hesitant about nailing anything into the wood planked wall because I had spent so much time building it. But as luck would have it, I found some long, skinny-ish nails that fit perfectly in between the planks and sank deep enough into the wall to hit the studs. So no damage was incurred while hanging. Hallelujah! It was a win-win. I ended up using two nails instead of the mounting nail that came with the kit since it sits at an angle and would have damaged the planks. Plus I figured two nails were better than one. Seems logical, right?

The only thing left to do was to have my hubby hang that bad boy. It’s light enough to where I can lift it, but not exactly over my head whilst trying to strategically place it on the nails. Sometimes you just have to let the men feel manly and do the heavy lifting. 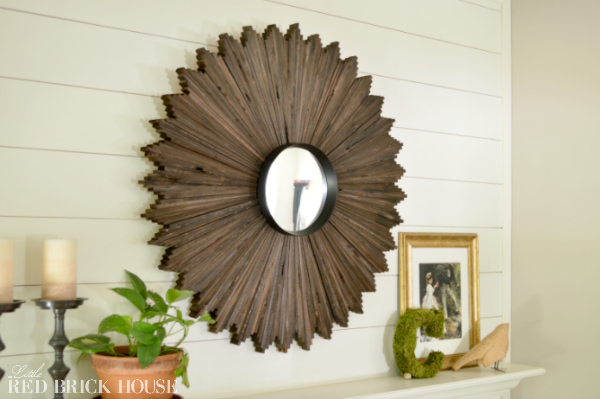 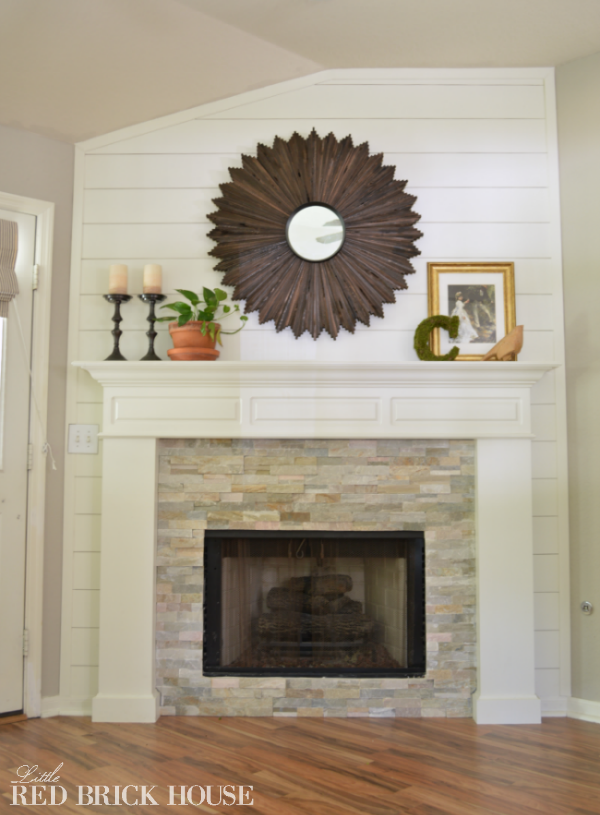 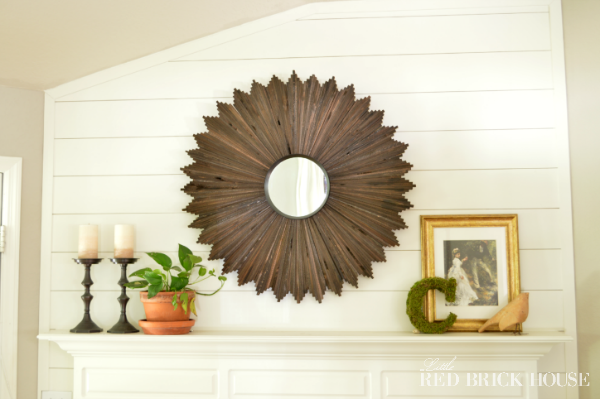 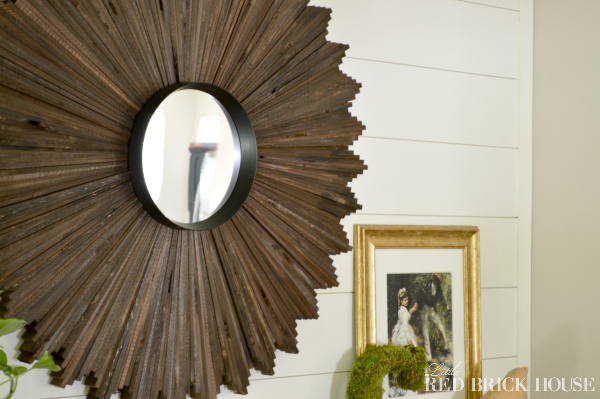 What do you think? Are you still a fan of sunburst mirrors? Or have they passed their prime?

P.S. Be sure to stick around for Friday’s post! I promise you DO NOT want to miss it!

{I’m linking up at these parties}

Join our e-mail list to receive 15% off your first printable art order in the shop!

Creativity has been a huge part of my life since I was a little girl, and now that I have a home of my own, that love of creating has spilled over into decorating. My hope is to inspire others to dig deep to find their style and creativity so they can turn their home into a place all their own.  >>>